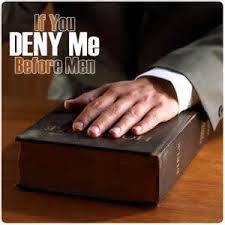 One of the saddest passages of scripture in the entire bible is found in Matthew 26:69-75. In the passage Peter, who must have been in a state of deep despair, denied Jesus, not once, but three times and the final time he did so with cursing and swearing. Peter, along with the rest of the disciples, had just witnessed Jesus being taken by the Jewish authorities on the night before his crucifixion  and with the rest who were with Jesus forsook Him and fled (vs. 56). Peter, at least, and John followed along with the procession that led Jesus away and went into the court yard where He was being held.

Jesus had told Peter earlier that day that he would deny Jesus as he did, but Peter did not believe Him and, even though he was forewarned, went ahead and denied Him anyway. Jesus said in Matthew 10:33: “But whoever denies Me before men, him I will also deny before My Father who is in heaven.” It is a serious thing to deny Jesus and we must be careful that we are never found doing so, though we may sometimes be tempted.

We don’t, as Peter did, have to outright deny that we are followers of Jesus to deny Him, but we must be sure that we do not live our lives in such a way that denies that  Christ is in us  and that we are attempting to serve Him as we should. If we live a life that is predominated by sin, we are denying Christ as surely as we are saying that we do not know Him; we are denying Him by not allowing Him to influence us to live the righteous life He died to make possible for us.

John said in 1 John 3:9 : “Whoever has been born of God does not sin, for His seed remains in him; and he cannot sin, because he has been born of God.” It would be easy to take this out of context and try to insist that once we are born again and had our sins remitted, that we will never sin, but if we keep it in its proper context we can see that John means the saved do not make sin their way of life. One who is born of God pursues a life of righteousness and is successful, if his heart is right, because God will even aid him in this pursuit.

Still, even after we have our sins remitted in baptism, we still sin from time to time and must learn to repent of that sin to be forgiven once again (see the story of Simon in Acts chapter 8). John’s point is that we must not live a life of sin once we are born of God, but, instead, pursue righteousness or we are of the devil and not of God. If we pursue a life of sin after we have once been saved, we are denying the saving grace of Jesus and are again lost, our state being worse than it was before we were saved (2 Peter 2:20-22).

Also, if we sin willfully, knowing what we are doing is wrong but doing it anyway, we are denying Jesus and we should be careful that we eliminate and repent of such sin in our lives. We are to keep the commandments of Jesus, so when we willfully break them we are denying Jesus the proper place in our lives. So, let us pursue lives of righteous service to God and His Son and not make sin a way of life,as we did before we put on Christ  in baptism (Galatians 3:27) and let’s not do things that He has taught us are wrong without repenting of them, until we are able to eliminate the sin from our lives.

Remember, if we deny Jesus, He will also deny us before God come the judgement day and we will be eternally lost. Once we are saved, we are not “always saved’ but we can be lost again and lose our souls come the judgment day ( see 2 Peter 2). With this is mind, let us always be diligent and pursue righteousness to the honor and glory of God and not for our own glory or honor.

Like Loading...
This entry was posted in Christian blog and tagged Denying Jesus, God, sin. Bookmark the permalink.