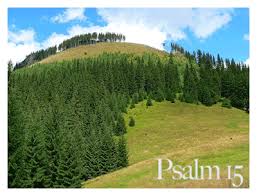 The Psalm asks the question “Lord, who may abide in Your tabernacle? Who may dwell in Your holy hill?” This is not just the person who comes to church services whenever the doors are opened and is accepted there, but the psalm is asking who is acceptable to live with God, presumably in heaven in the after while, but also to live their lives with God in this life, to be an intimate of His and to properly live with His spirit and with Christ. The psalm then goes on to list several basic qualities that should be found in every child of God.

First of all is ” He who walks uprightly, And works righteousness, And speaks the truth in his heart.” These three attributes are inter-related and consist of one who is after God’s own heart as was David (1 Samuel 13:14), the author of the Psalm.He who walks uprightly is one who keeps the law of God. He who works righteousness is one who bears fruit by doing the works of the law. He who speaks the truth in or from his heart is one who keeps the law of God, speaks to others about it and does not speak deceitfully, but instead always speaks the truth from his heart. In him is found no guile or no attempt to deceive others with words.

Next is ” He who does not backbite with his tongue, Nor does evil to his neighbor, Nor does he take up a reproach against his friend.” These three attributes are inter-related also. One who does not do evil to his neighbor is one who of necessity is doing good to his neighbor. In the absence of evil is good and visa-versa. Consequentially, he will not turn against his friend (or neighbor) even when thinking there is a reason to and he will not backbite with his tongue. The later is a common practice in workplaces and politics, but if we are to live with and for God we will not participate in such practices, but truly do good to our neighbor.

Next we are told to despise the vile or sinful person and to honor those who fear the Lord and serve Him as a result. If we are to despise the sinner it means we will love Him and seek his salvation, but to hate the sin that he is doing, not being influenced by him or holding him in high esteem. Rather we are to honor and hold in high esteem those that honor and serve our God as we are are trying to do. The later should be our role models and not those who are of the world. We should despise and reject the influence of the worldly and seek out the influence of the godly.

Finally, the next three lines: “He who swears to his own hurt and does not change; He who does not put out his money at usury, Nor does he take a bribe against the innocent”; are all inter-related as well. Actually, the new testament teaches us that we should not swear or take an oath at all (James 5:12), but the bible often uses the taking of an oath (especially under old testament law) to represent commitment. The lesson is that we are to keep those commitments we make in this life, though it is not advantageous to swear by God or anything else, which is a sin. Still, we must keep those commitments we make in this life and meet them as surely as if we have sworn an oath to create them.

Also, we are not to take advantage of the poor either through usury (lending at interest) or by any other means. If we have employees we are to see that they get a fair and just wage for their services and not take advantage of their need to make a living by paying them the bare minimum they need to survive. The bible has much to say about those that abuse the poor and God seems to hate no sin more than this one. In many other psalms and elsewhere, He is seen as the champion of the poor, the widowed and the orphaned.

Jesus applied a prophesy of Isaiah to Himself in Luke 4:18,19: “The Spirit of the Lord is upon Me, Because He has anointed Me To preach the gospel to the poor; He has sent Me to heal the brokenhearted, To proclaim liberty to the captives And recovery of sight to the blind, To set at liberty those who are oppressed; …” In many ways the message of Christ is for the poor and the downtrodden and the majority of those that make up His church today seem to be those mentioned by Jesus here. Those who are rich and powerful in the world often feel no need for a savior, though they  have as great a need as any.

The bottom line is that he who does the things of this psalm shall not be moved and shall dwell in the house of the Lord forever. This means we must keep the law of Christ and serve God through Him all the days of our lives and be a blessing to others as we do so. I pray that we will all keep the statutes of this psalm and thus be able to live with God not only in this life but in the life to come.

The things that make one acceptable to God have pretty much stayed the same since old testament times, though the law and God’s covenant with man has changed under Christ, as has the way that we may have an acceptable relationship with God has changed (see Plan of Salvation above and under categories). We will do well  to keep this psalm close to our hearts and live by its statutes.

Like Loading...
This entry was posted in Christian blog, The Psalms and tagged being acceptable to God, God, living, Psalm 15. Bookmark the permalink.